Ensuring long-term protection of the Nimba Mountains requires transforming the local economy so that the chronic threats facing the mountains’ unique species and ecosystems are drawn away, and mine development supports, rather than undermines, conservation. 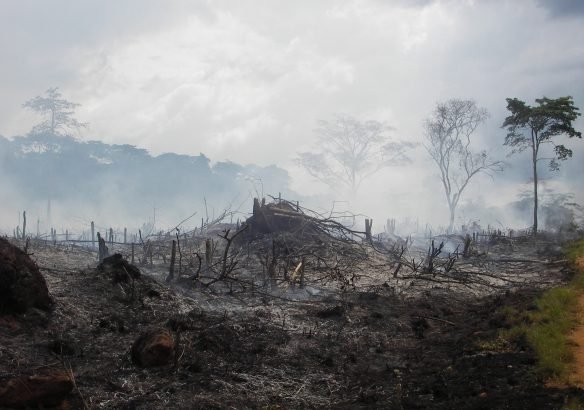 Threats to the Environmental Integrity of the Nimba Mountains

Threats to the integrity of the Mount Nimba WHS have come from subsistence and sometimes commercial pressures from the surrounding population including hunting, agriculture, grazing, uncontrolled use of fire and tree-cutting, mineral exploration in the adjacent mining concession, refugee movements and, more recently, invasive exotic species like Chromolaena odorata. They pre-date SMFG’s arrival by many decades.

Starting in the early 1990s, parts of the conservation community working on Nimba concluded that subsistence pressures represented the chronic and most pervasive threat to the survival of the mountains’ extraordinary biodiversity.

As a result, SMFG has both collaborated extensively with the management agencies for the Mount Nimba WHS to increase its protection, and supported local development to draw subsistence pressures away from the SNR. Former hunters from surrounding villages are supported to undertake animal husbandry (pig-farming), too, for example.

In developing the Project, SMFG would not only minimise its footprint in the mining area, the company would contribute significantly to transforming the local economy through sustainable agriculture and careful spatial planning in the Buffer Zone, reducing subsistence pressures and drawing them away from sensitive areas like the Mount Nimba WHS.

Mine development could be a significant part of the solution to the long-term threats to the Mount Nimba WHS.