Management of the Nimba SNR started. Villages and farms inside SNR relocated to outside. Bamboo planted to demarcate the boundary. Active biological research began

Biosphere Reserve established in northern Guinean Nimba Mountains, including an area for strict conservation and an area for mining

Due to an error in Guinea’s nomination of 1981, a revised proposal for the Guinean portion of the WHS excluding the northern 50 km2 was submitted to World Heritage Committee but rejected

Mittal Steel, later ArcelorMittal, starts re-opening iron-ore mine in Tokadeh, Liberia, near Guinean border. Rehabilitates most of the former railway and the port of Buchanan. Export of iron ore start a few years later

CEGENS restarts conservation at Nimba, including transboundary collaboration and protection of Déré Forest, supported mainly by EU/UNOPS, UNESCO and SMFG

Large-scale logging and agricultural colonisation of the Déré Forest

Care and maintenance of SMFG’s infrastructure, with targeted environmental and social research to support an ESIA

The northern 60% of the Nimba Mountains was established as a strict nature reserve (SNR) in July 1944, spanning what is today the Guinean and Ivorian Nimba Mountains. Management of the reserve began in 1946 by relocating villages and farms inside it to outside the boundary, and access was prohibited. The SNR was expanded in the mid-1950s in the southwest, near the villages of Nyon and Thuo. When measured with modern GIS technology, the full SNR covered just over 200 km². Significant research was conducted in the Nimba Mountains in the 1940s and 1950s, resulting in numerous publications.

Guinean Independence and Mining in Liberia

With Guinea’s independence in 1958, most foreign researchers left but continued studies in Côte d’Ivoire or Liberia, where nearby research stations were set up in the 1960s and 1970s. Following the identification of high-grade haematite in the Liberian Nimba Mountains in the mid-1950s, very close to the borders with Guinea and Cote d’Ivoire, a large, open-pit iron ore mine was constructed starting in 1960 and operated until the early 1990s, when it was abandoned because of the Liberian civil war.

Mineral exploration first started in Guinea in the late 1960s, led by the United Nations’ Development Programme (UNDP), and then by various other investors working with the company Mifergui-Nimba throughout the 1970s and 1980s. Although several studies and environmental impact assessments were conducted, a mine was never developed. The first phase of Liberia’s civil war (1990-96) made it impossible to export ore via the nearby railway which ran from 2 km south of the Guinean border to a deep-water port at Buchanan, on the Liberian coast. 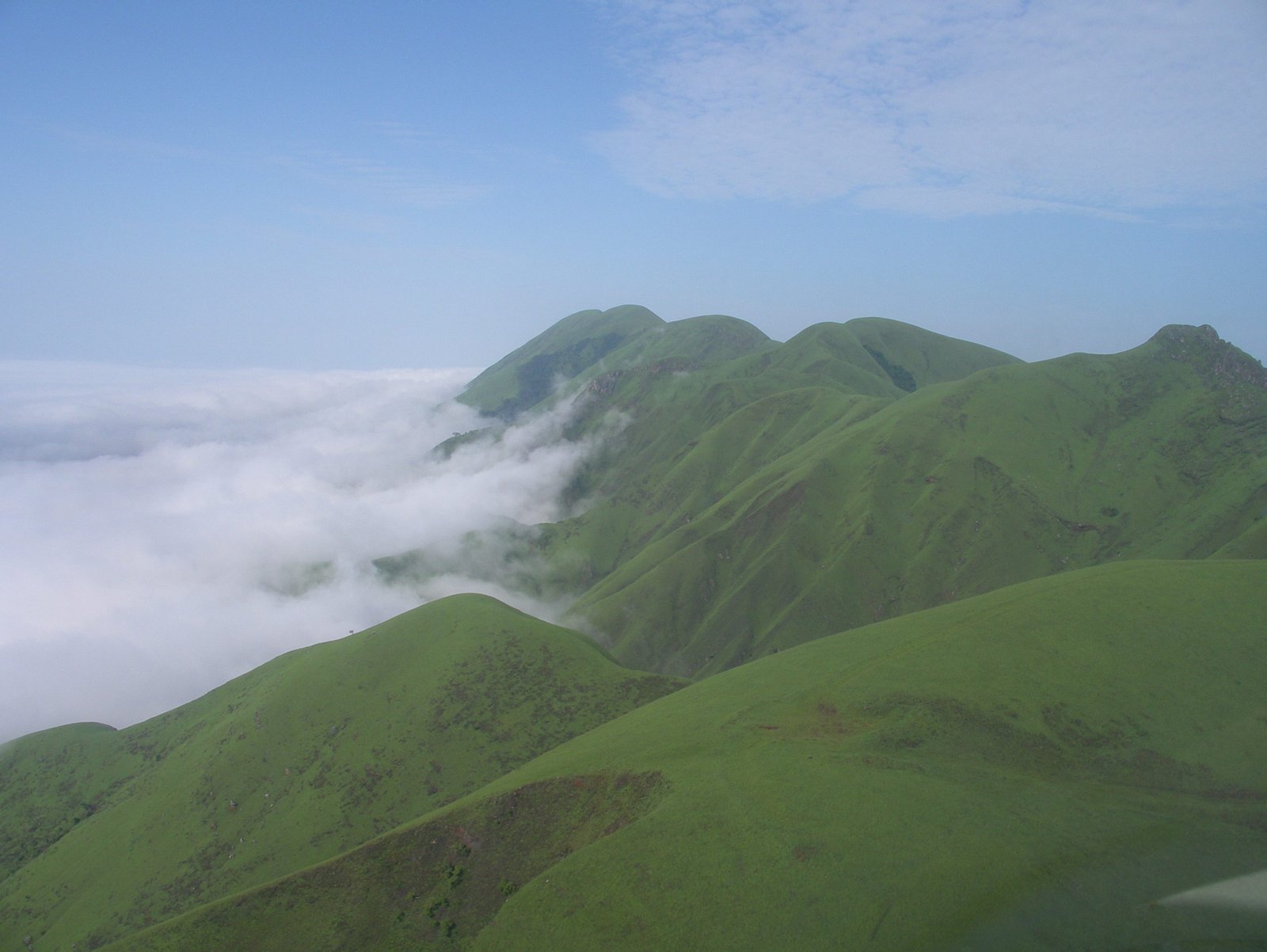 Creation of Biosphere Reserve and a Natural World Heritage Site

In 1980, the Guinean part of the Nimba Mountains was recognised as the Nimba Mountains Biosphere Reserve (NMBR) under UNESCO’s Man and Biosphere (MAB) Programme, consisting of a core conservation area of approximately 100 km² in the southern two-thirds of the Guinean SNR, and a northern ‘buffer zone’ of approximately 50 km², including the main identified iron ore deposits where mining was expected.

Following nomination in 1981, the Guinean portion of the Nimba Mountains was inscribed on the List of World Heritage because of how the site contains outstanding representation of on-going ecological and biological evolutionary processes of habitats and species (criterion ix for outstanding universal value (OUV)), and the number and diversity of species and ecosystems present, including rare and endemic species and habitats (criterion x for OUV). The Ivorian part of the Nimba Mountains was added to the WHS in 1982. Later, a formal ‘retrospective declaration of outstanding universal value’ was adopted by for the Mount Nimba World Heritage Site (Mount Nimba WHS) specifying exactly how the site fulfils criteria ix and x for OUV.

The boundaries for the Mount Nimba WHS proposed by Guinea in 1981 included the entire SNR as amended in the mid-1950s.

The Government of Guinea subsequently stated that the nomination had an error: the intended boundary should have been that of the core area of the Biosphere Reserve of 1980. This was important but controversial because this intended boundary nomination would continue to permit mining of the identified iron ore in the northern portion. Mineral exploration continued actively throughout the 1980s by SMFG’s predecessors. A revised boundary nomination was submitted in 1991 with the northern portion excised but this was rejected by the World Heritage Committee.

In 1992, the Mount Nimba WHS was inscribed on the List of World Heritage in Danger, due to the arrival of Liberian refugees and proposed iron ore mining.

Every year since 1992, the Mount Nimba WHS has been maintained on this List, citing at different times subsistence pressures, the intermittent presence of refugees and possible impacts from mining. 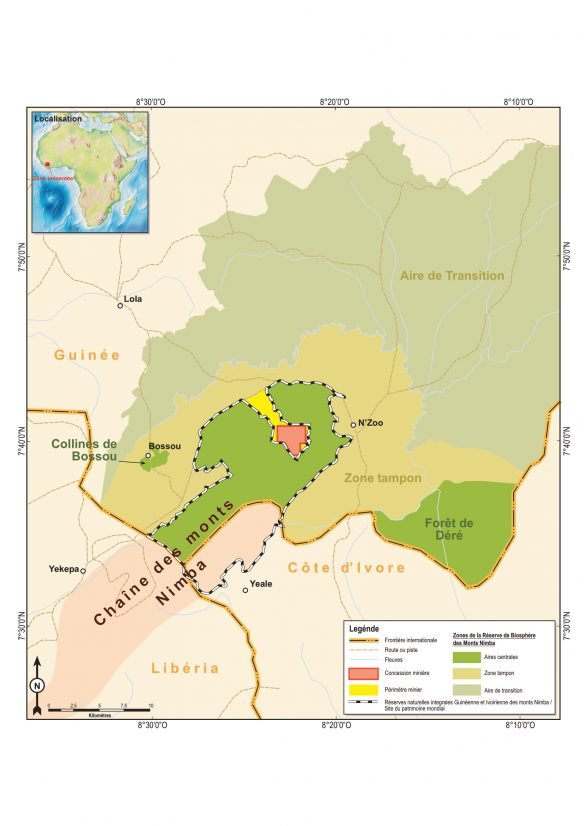 A field mission in May 1993 led by the World Heritage Centre, with the participation of IUCN and advisors, the MAB Programme, UNDP, the United Nations’ Environment Programme (UNEP), national and international NGOs, and representatives of the Government of Guinea, resulted in a recommendation to amend the boundaries of the Mount Nimba WHS in Guinea.

This recommendation was accepted by the World Heritage Committee in December 1993. This boundary amendment did not exclude the full area proposed by the Government of Guinea in 1991 but did exclude a keyhole-shaped Mining Enclave around most of the known iron ore deposits and in which mining activities would be permitted. The remainder of the Guinean Nimba Mountains SNR, and all of the Ivoirian Nimba Mountains SNR, would be permanently protected.

The mission of May 1993 recommended also that the Nimba Mountains Biosphere Reserve be expanded to include three core areas: the Guinean Nimba Mountains (minus the Mining Enclave), the Bossou Hills (famous for its locally sacred, semi-habituated chimpanzees) and the Déré Forest east of the Nimba Mountains and contiguous with two classified forests in Côte d’Ivoire. This recommendation was accepted by the MAB Programme.

Read more about world heritage sites and criteria, and specific documents on the Nimba WHS

In 2010, the Guinean Government issued a decree that (i) aligns the Nimba Mountains SNR’s boundary with those of the Mount Nimba WHS, (ii) classifies the Bossou Hills and Déré Forest as strict nature reserves, and (iii) classifies the NMBR’s Buffer Zone and the ‘Mining Perimeter’ – the area inside the keyhole reserved for mining in 1993 but outside SMFG’s mining concession – as managed nature reserves.

Activities in these managed nature reserves must be strictly controlled to be compatible with the conservation objectives of the adjacent strict nature reserves. The decree explicitly permits mining infrastructure and related activities in both the Mining Perimeter and Buffer Zone to allow development of the iron ore in the mining concession. Finally, a large Transition Area surrounding the Buffer Zone was established in which good practices from the latter would be replicated.

In addition to the protection statuses of areas of the Biosphere Reserve in Guinea and the Ivoirian SNRs, the Liberian portion of the Nimba Mountains range has been officially protected since 2003 as the East Nimba Nature Reserve.